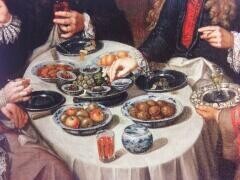 French cuisine and French dining are well-known for their exquisiteness, full of sophistication and elegance. The roots of the French dining experience can be traced to extravagant kings during the time of Middle Ages and the luxury lifestyle of Versailles in the 17th  and 18th centuries. We cannot talk about this topic and not mention the grandiose feasts people of the higher class would throw for any event. Fortunately for them, they did not have the restrictions of using basic cutlery and would indulge in their feast with bare hands. The French folk used banquets to assert their high position and wealth and that is done no better than lavishing your guests with multiple-course meals of entrees, roasts, and desserts, and don’t forget the insane amount of wine. Evidently, the French elevated mealtimes into an experience and an almost theatrical and orchestrated show. This allowed for a culinary evolution and experimentation of new extravagant and luxurious tastes. French chefs now must provide not only food to the king but also an elevated fine dining experience. One of the things that transcended from the Middle Ages to modern times is the French’s passion and honor for their cuisine. As their work was almost seen as an art that needed to uphold the standard of maintaining a perfect balance of flavors that satisfy even the pickiest royalties.

However, in the case of Francois Vatel, the culture of French dining would provide a detrimental consequence. Francois Vatel was a French chef from the Conde family in Chantilly and took pride in his culinary skills. One fateful year, Vatel had the honor to organize a two-day feast for King Louis XIV and the group that followed him on his visit to Chantilly. This event came with a huge responsibility to live up to the French standards of fine dining, providing music, food, and a good atmosphere. After all, there is no one you would like to impress more than the king of France. Vatel and his people had fifteen days to prepare for six hundred nobles and seven thousand more people, and in those days Vatel had hardly any sleep. Those factors include other minor mishaps, further deteriorated Vatel’s state of mind. This story has now reached its culmination and – on the second day, Vatel got informed that there won’t be enough seafood for his aristocratic guests. Upon hearing that the chef went to his room and ran his sword through his heart, causing his death. As fate has it, he was later found by someone who came to deliver the news that the seafood got delivered. Once the word got out people started to assume it was his pride that led him to his death, which was both praised and criticized. Be it because of the stressful state Vatel was in or his honor wouldn’t let him disappoint the King or maybe even both, his case showcases the importance French society gives to its cuisine and the dining experience. Surely, no chef should be driven to a position where the only possible escape from culinary humiliation is drawing a sword through your heart.