What we can learn from #Swedengate 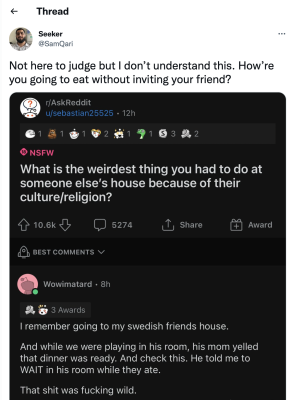 Recently, a tweet about cultural differences blew up on Twitter as users scrambled to understand Swedish culture. Dubbed “#Swedengate”, the conversation revolved around a statement a user made on Reddit, in which they recalled that as a child when they visited their Swedish friend’s home for a playdate, their friend’s family ate dinner but didn’t offer the user any food. The Reddit user was not of Swedish origin and they said they were surprised by this behaviour.

Turns out, they were not the only one. Twitterati from across the world chimed in on what they thought was discourteous behaviour. People belonging to a vast number of cultures in continents as varied as North America, South America, Africa, Asia and even the southern parts of Europe tweeted that not feeding a guest in your home was just not acceptable behaviour in their culture.

I don’t know whether it really works in Sweden that way. I am not Swedish and tweets from purported Swedes both agreed and disagreed with the Reddit user’s statement. Those who agreed said that it would be considered rude in Sweden if the host family had fed the child any food without prior approval from the child’s parents. They would have found it normal if the child had brought their own food. In India, if a guest brought their own food and ate it at a host’s home, it would rank right on the top of the list of most insulting things you can ever do.

What #Swedengate actually does remind us is that what is polite behaviour or rude behaviour depends on the context. And the culture in which this behaviour takes place provides this context. Academicians would argue that there is no one fixed definition of culture, yet, wouldn’t you agree that you know what I am talking about when I mention ‘culture’? It is one of those terms that we all know the meaning of and yet struggle to define.

#Swedengate also focuses on one of culture’s main attributes: implicitness. When you are mingling with people from a different culture, there are certain things you can plan for: dress code for an event for instance, or what is an appropriate hostess gift (if one is needed at all), topics that you can cover as part of polite conversation (Weather? Yes; Politics? No) or whether you can simply arrive at someone’s doorstep (like in India) or you need to make an appointment days in advance (The Netherlands, Germany). Slurping your noodles may be rude in the West but not in Asia.

But most cultural norms are implicit. As some Twitter users from South America and Africa pointed out, it was customary for their families to always cook extra food for lunch or dinner, just in case someone drops in unexpectedly. If no one did, they would eat the leftovers the next day. This is not a cultural norm you would find written explicitly in a guidebook and yet it happens in practically every home. If the Reddit user hadn’t come from a different culture, they wouldn’t have been shocked by the Swedish family’s behaviour, because their behaviour would have been just another normal thing for them. At the same time, the Reddit user’s family didn’t anticipate their child not being fed because it was implicit in their own culture to feed guests and this is not what they would consider as a possible cultural difference that they need to plan for.

People are moving across cultures for various reasons nowadays: education, employment, and even love. They are learning norms about other cultures and incorporating ones they like into their own behaviour. This intermingling of people is creating newer subcultures which will hopefully lead to a better understanding. As one Twitter user pointed out, they understand the Reddit user’s story from both perspectives as they are half-Asian and half-Swedish.

Instead of focusing only on the ‘I can’t understand how Swedes can let a child go hungry’ aspect of #Swedengate, what we need to take away from this viral tweet thread is the understanding that all of us are human, but our cultures can be different. But just because they are different, it doesn’t mean they are automatically wrong. A stronger sense of acceptance is a good thing to cultivate within us as we navigate this world.